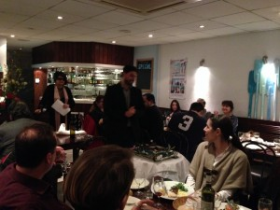 One of the most hard working groups of the international fraternity in London - given what  takes place in Greece with respect the financial crisis and the demand  for news coverage, celebrated in traditional style their second  anniversary as well as the cutting of the traditional...Vassilopita...

The venue: The Santorini restaurant on Moscow Road at the heart of Bayswater-the Greek suburb of London for over 200 years!

Over  sixty journalists, media and communication specialists, together with  their family and friends enjoyed the excellent food, wines and popular  Greek music.

The supporters of the Association included Nick Kontarines from  "Yamas Wines" and Noeleen Alexopoulou from the International Diplomatic  Supplies who offered the excellent wines; as well as Jewell disigner,  Nikoletta Tsiama who offered the gold plated "Flouri" engraved with the  initials GPA-UK, 2014.

Present at the event H.E. the Greek Ambassador Konstantinos Bikas who jointly cut the ...chocolate-based....

By John Faraklas, "All About Shipping" 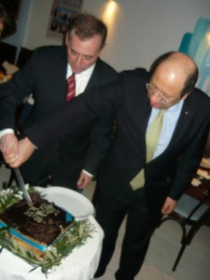 (Left) The Greek Ambassador and the Cyprus High Commissioner cutting the cake....The Vassilopita

(Right) The lucky winner of the GPA's sovereign was Economist Manos Papatheophanous!