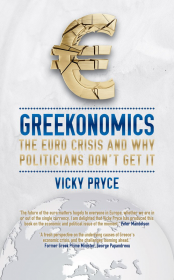 Economist Vicky Pryce reflects on the current crisis in the Euro Zone  its causes and how Europe has responded, and offers her thoughts on what  might and what needs to happen if the Euro is to survive in its current  form. She pays particular attention to Greece, the country of her  birth, the country first in the firing line in the Euro crisis and the  country even now seen as Europe s problem child . But as Pryce explains,  the roots of the Euro s crisis are much broader than a set of  profligate governments in Greece, Ireland, Portugal, Italy or Spain. The  flaws in the current system were obvious to economists from the outset.  Politicians ignored or downplayed these in creating the Euro and indeed  made the problem worse by watering down the controls that were in  place. If the Euro is to survive in the long term, even greater  political and fiscal integration and cooperation will be required. The  dilemma is that the slow and unimaginative response of the German and  other northern European political classes to the current crisis and the  consequent enormous pain that is now being inflicted on many countries,  has led to greater nationalism and made reaching the consensus necessary  to pull Europe out of its crisis more, rather than less, difficult.  This book will be required reading for economists, politicians, market  practitioners, public servants and anyone interested in understanding  the current crisis.